Meet the Vitzellen behind the Vodka

The love of history and heritage is alive and well at Bogue Sound Distillery.  From our 1923 Ford Model-T to the very names of our labels, we celebrate our history.

The Old Capitol Prison of Washington was built in 1815 as a school, then used as the capital building for a brief period but was most known for being a prison during the civil war. During its time as a prison, many women were enlisted to serve as nurses and aids to the wounded prisoners.  Vitzellen was a hired nurse. 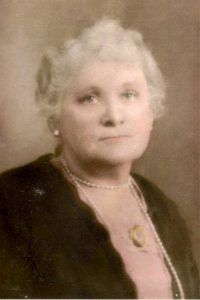 After a heavy battle, officers from Jeb Stuart’s cavalry were taken to the capitol building to be kept and tended to.  Nurse Vitzellen cared for an officer, John A.P. Conoley, who had serious injuries, and during this time became very close with him.  Once recovered, John made a promise to her that he would honor and carry out her legacy by naming his first daughter after her.

In 1868, he kept that promise when Alice Vitzellen Conoley (pictured) was born – the great grandmother of Richard Chapman, the founder of the Bogue Sound Distillery.  Nurse Vitzellen was the namesake, and the name has carried forward into other generations.

The Vitzellen name will now forever be remembered through Vitzellen Vodka, a Bogue Sound Distillery original.